Shaun Moore doesn’t run to win races, or to beat others, he simply enjoys the personal satisfaction running gives him. In 2017, Shaun set himself  a challenge to do 5 ultra marathons in 5 months. An amazing effort, considering that at the time, Shaun had been running only five years. We sat down with Shaun and asked him how he started running and ended up tackling the challenge of running ultra marathons.

Starting running without structure or training

“People are often surprised to learn of my running background, in December 2012, I began running and in that same month, ran my first event. It was a 5km run, I still remember this run quite clearly as I walked at 3km and picked up a stitch shortly after. But I finished, and to me, that was the most important part.”

“After this event my addiction, as I call it, started. I felt an urge to constantly better myself and push my boundaries to see what exactly I could achieve.”

Shaun admits that at this time in his life, he was just running erratically without any proper structure or training. Keen to take his running more seriously, Shaun got a coach in 2014 and began a training regime to get the most out of his running.

“I still remember when my coach Nadelle declared that I had the potential to run a sub-40-min 10km.”

Shaun laughed at the suggestion in disbelief. Little did he know that just months later he would run a sub-40-min 10km, several times.

Fast forward to the year 2016 and Shaun was training the hardest and strongest he had ever trained in his life. The goal was the Gold Coast Marathon, with his eyes firmly focused on a strong time.

But it wasn’t to be, at the 28km mark, he succumbed to cramping. He was devastated.

At this point my failure ended up being my turning point and would change the way I viewed both my running and my life.

A few weeks post marathon, Shaun agreed to pace for a close friend who was participating in 160km event (100 miles). Shaun arrived in the evening prepared to pace and support his friend through 40km (25 miles).

When Shaun began running, his friend was at the half way mark. Shaun did his best to keep his friend moving through the cold night. They chatted and conversed as they ran the hours away.

As the sun began to rise, the two friends approached the finish line and without even realising, Shaun had run 80km (50 miles), double his previous ever longest run.

“This realisation, was the exact moment my own personal mental barriers were broken down. I suddenly saw my running differently, and this would be the catalyst behind my 5 ultra marathons in 5 months.”

Breaking down the barriers

With no time to train properly, Shaun was keen to test himself both physically and mentally.

He would do just that.

Within the first twenty minutes, Shaun tripped on a rock along the beach and fell. With no serious or obvious injury, Shaun continued, but began to endure pain and discomfort. He would learn the next day that he had suffered cracked ribs and a mild concussion.

Shaun had pushed through the pain and mental barriers and completed the 100km run in 14 hours and 28 minutes.

“Upon completing this major event you’d expect me to feel on top of the world. Instead I was left feeling numb. All of a sudden I was unable to run due to my injuries and the disappointment left my body and mind feeling unsatisfied,” Shaun says.

“Fast forward to a month later. I began to run again, but it was not the positive and uplifting experience I was hoping for, instead it was tougher than not running.”

“I was struggling to even run 5km and I became my toughest critic. I dreaded going for runs as I would continually feel disappointed.”

One day, after a failed training run, which Shaun had cut short, he took to Instagram and without thinking, simply wrote and shared how he was feeling at the time.

What happened immediately after changed the way Shaun viewed his running and his reasons for doing so.

“I got home and checked my phone, where I found an influx of comments and direct messages from both people I knew and people who were complete strangers,” Shaun says.

We all have tough days, but we are never alone.

“At this exact moment I realised I wasn’t alone and had a great sense of needing to show others they were not alone either.”

The Challenge: 5 ultra marathons in 5 months

And so, Shaun’s challenge to run 5 ultra marathons in 5 months was born.

He would run for the 1 in every 5 Australians that will at some stage in their lives suffer from depression and/or anxiety, raising funds and awareness for The Black Dog Institute. 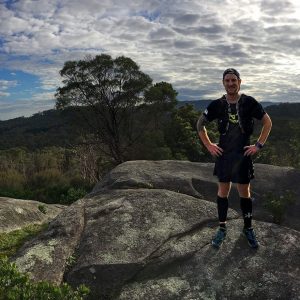 “Although my friends see their children as normal kids, the general population I’ve found do not fully understand how autism affects people, and so I thought it would be another amazing cause to raise awareness around.”

Using his Polar V800, Shaun tracked his ultra marathons in Australia, including the 100km Tassie Trail Fest Multiday Madness in Tasmania and the Coburg 24hr in Victoria where he ran 162km and finished 5th overall, and by linking his Polar Flow and Strava account, Shaun was able to share his movements on his website with his friends, family and fans.

Running And Travel | 7 Marathons On 7 Continents

Steve Williams has traveled the world, running full marathons on all seven continents. Read Steve’s travel tips for runners and draw inspiration from his travel photos.

Can Running Backwards Give You a New Outlook?

Does reverse running have the potential to improve your forward runs? That’s what the studies say. Here’s how (and why) you should give it a go.

Gearing Up for JOGLE With Ultramarathon Runner Imo Boddy

As she prepares to become the youngest woman to run the length of the UK, we chat all things ultramarathon with Imo Boddy.

Ready for your next race? Not unless you recover. Here’s how to ensure post-marathon recovery and gradually get back to training.

The Kickstart Guide To Trail Running

Here’s why and how to start trail running, whether you’re completely new to running or a seasoned road runner looking to add trail running to your regimen.