Get up early, eat and drink regardless of pre-race nerves. Breakfast replenishes carbohydrates (stored in the liver), which your brain uses during the night so when you wake up there isn’t much left. 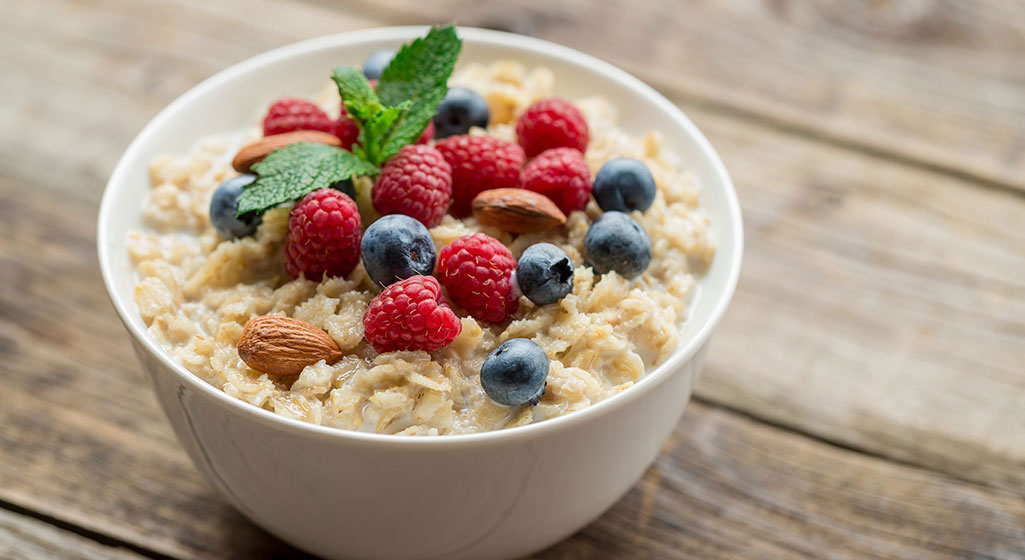 What your pre-marathon breakfast should consist of depends on personal preferences, but to delay the point at which you bonk, your breakfast should include at least 100 grams of carbohydrates.

Whatever you choose to have for breakfast, aim for the same timing you’ve done before hard training sessions and smaller races. The optimal timing for breakfast is three to four hours before the start, even two to three hours before may work if you don’t suffer from gastrointestinal problems.

Hydrate and enhance your performance

Aim to drink about 1/10th of your body weight in ounces, four hours prior to the start to give yourself plenty of time to flush any excess fluids. Check your urine color: If it’s dark, keep drinking a little more – if it’s light, you’re good to go. No need to go crazy on the fluids but you don’t want to start with dark colored urine.

Fifteen to thirty minutes before the race look to include caffeine, branched-chain amino acids (BCAAs) and simple sugars (if needed) to boost your performance:

What you do in the early miles will set you up for success in the later miles. Pace yourself with your nutrition – plan out when, where and how you’re going to take your nutrition along the course of the race.

A successful nutrition plan spreads your nutritional intake across your entire activity. If you wait until you’re hungry or thirsty, it may be too late to get the nutrients you need.

The “enough, but not too much” principle is applicable in fueling during the race. The goal should be to take in calories and fluids in small frequent doses rather than as large quantities, spread out every hour or so.

Try to eat or drink something every 15-20 minutes, however small it may be!

The “trickle feed” method will also reduce the likelihood of having gastro-intestinal issues on race day, which means no more emergency trips to the porta-potty! 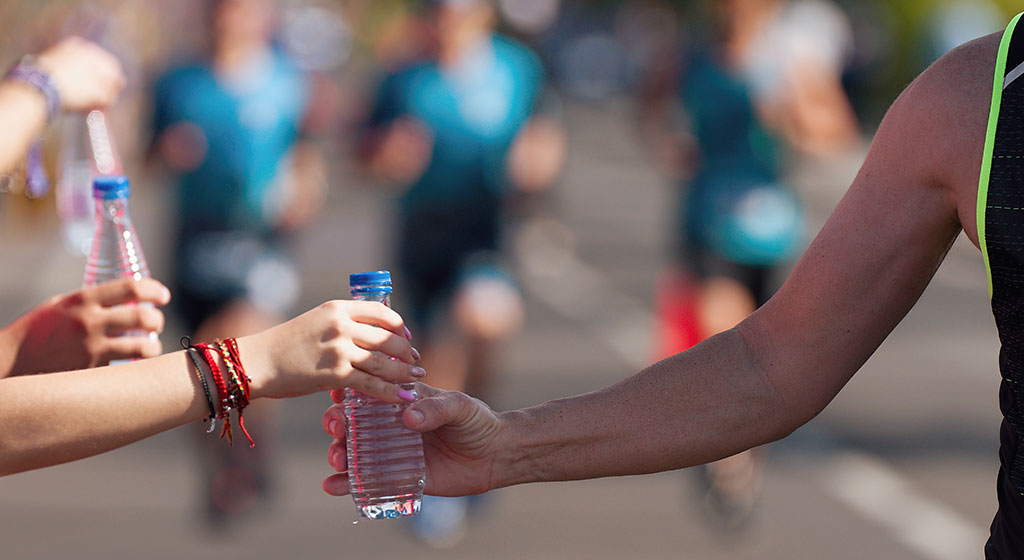 Drink based on your sweat

The only way to really understand your sweat rate and how much drinking is required is by weighing yourself before and after training in the weeks leading up to the marathon.

This way, your sweat rate can be calculated by subtracting the ‘weight after’ from the ‘weight before’ and adding the volume of fluids consumed. If you’re running in similar conditions and at a similar pace to the actual marathon, sweat rates will be similar to training. The cups you receive during a marathon usually contain about 150 ml (5 oz.) and you probably consume about 100 ml of that (3 oz.). To prevent dehydration, you will have to drink amounts that are similar to your sweat rate.

While sweating, you’ll lose electrolytes, such as sodium and chloride, so make sure you’re consuming an electrolyte beverage that contains between 300-400mg sodium per serving.

Not only does dehydration make it harder for your heart to pump blood to working muscles, it also makes you feel like you’re working harder due to its effects on the central nervous system. What’s more, a new study found that drinking according to a schedule versus drinking to thirst actually improves performance.

Fuel your body with carbohydrates

Carbohydrate requirements are more straightforward. Studies seem to suggest that you can use about 60 grams of carbohydrate per hour from most carbohydrate sources.

Athletes should target 30 to 60 grams per hour:

Recent studies also suggest a dose response relationship, i.e. more carbohydrate could be better for performance. But of course, too much might cause gastrointestinal problems and have the opposite effect so it’s a balancing act with your “gut feeling” as your gauge.

Did you know that you can actually train your gut to tolerate drinks, gels, bars, etc.? This means you should be ‘building gut strength’ regularly by consuming these in training. Especially if you don’t usually consume carbohydrates, you may be more likely to have gastrointestinal problems during the race, unless you increase your body’s capacity to absorb carbohydrate during training.

Your carbohydrate fuel choice and the amounts you use should be based on how well you digest a particular fuel during a higher-intensity activity, the time it will take to complete the race, your acclimation to the weather, and the terrain.

To determine your best race day fueling plan, consider these variables, then thoroughly test your plan in training. Testing a variety of fueling options under different circumstances will give you the greatest potential for success come race day.

Extra boost for the final miles

During the final miles of a marathon our bodies may need an extra boost to cross the finish line. Consider a gel or run gum that contains caffeine and a little bit of protein.

The reason you need protein is that around the second hour mark of exercise and beyond, a small percentage of your energy requirements will be fulfilled from protein. If you don't provide some from your fuel mix, at least part of the time, your body will cannibalize its own lean muscle tissue to obtain the necessary amino acids. This increases ammonia – a primary culprit in premature fatigue during endurance events.

If your stomach can’t tolerate any food, consider a Carbohydrate Rinse. Our mouths contain carbohydrate sensors linked to the brain – detectors that tell our bodies it's okay to keep going because fuel is on the way. With just the knowledge of energy coming and the taste of sugar swishing around the mouth, sans any actual food, your brain gets a signal that it’s consumed energy and can help you finish strong.

Looks like you’ve spent a good while with our content – we’re thinking you find it interesting. You should know that there’s more of it coming at regular intervals (pun intended). To get the frequent running goodness automatically, sign up for our twice a month running newsletter.