How I used running power to run a sub-3 marathon

Clocking a sub-3 marathon is one of running’s biggest goals but breaking that magic barrier is far from straight forward. It takes more than just determination and dedication to a training plan, you need to know you’re running the right miles, in the right volumes and at the right intensity to get your body to the place where it can pull off the perfect race-day performance.

I ran my first and only sub-3 marathon at the London Marathon in 2014. Since then I’ve trained hard and attempted to repeat it on dozens of occasions but never quite pulled it off.

There’s a fine line between success and failure when you’re running close to the limit and asking your body to pull off a feat that’s close to the maximum of your athletic capability. Training optimally, staying injury free and getting to the start line in good condition is half the battle, and then there’s running smart on race day. All too often I’ve hit 18 miles on track for a 2:50-something but then blown up and flopped over the finish line in 3:15 or worse.

So, I was looking for a change and when the Polar Vantage V launched – complete with running power from the wrist and improved training load, recovery status and sleep insights – I wanted to find out if I could use these innovative features to help me get back below that golden number? That’s how Project Power was born.

Working with Polar’s coaches, the plan was for me to use the new metrics the Polar Vantage V provides in running power, cardio and muscle load, improved sleep and heart rate tracking, over a 12-week training block to see if we could train smarter and turn me into a sub-3 marathon runner once more.

Getting started: the baseline test

We started with a lactate test. This involved running sets of 800m on the track at a gradually increasing intensity while wearing the Polar Vantage V and Polar H10 chest strap to measure heart rate.

In between each rep, the team of experts from St Mary’s University in London, pricked my ear and took blood, which was later analysed to provide insights into my lactate levels.

From this we were able to determine my lactate threshold and set my heart rate training zones.

Using the running power data tracked by the watch, we were also able to set power training zones for my steady, threshold and interval efforts.

In practice, what this meant was that every time I ran in training, I now had three ways to monitor the intensity of each of my runs, heart rate, power and pace.

The stats from the tests also revealed that I was more than capable of maintaining a sub-3 pace but that I’d been neglecting the threshold work that’d really give me the best shot at putting in 26.2 miles at this pace.

All of this info was then used to create my training plan.

The plan followed a 12-week training block, with a heavy emphasis on threshold running. To begin with my weeks had threshold runs on Tuesdays and Thursdays, some hill sprints with a bit of threshold on Saturday and an easy run on Sunday. With a bit of strength and conditioning and rest on the others days.

Whereas in the past I’d normally run my threshold runs based on heart rate alone, this time I used power and heart rate. Because power provides an instantly responsive guide to intensity – as opposed to heart rate which can lag a bit – it helped me to ensure I was hitting the right level of effort from the very first step.

By monitoring both heart rate and running power my training sessions were optimised to get the maximum from every minute. That’s vital if you’ve got a day job to hold down while you’re shooting for a sub-3. 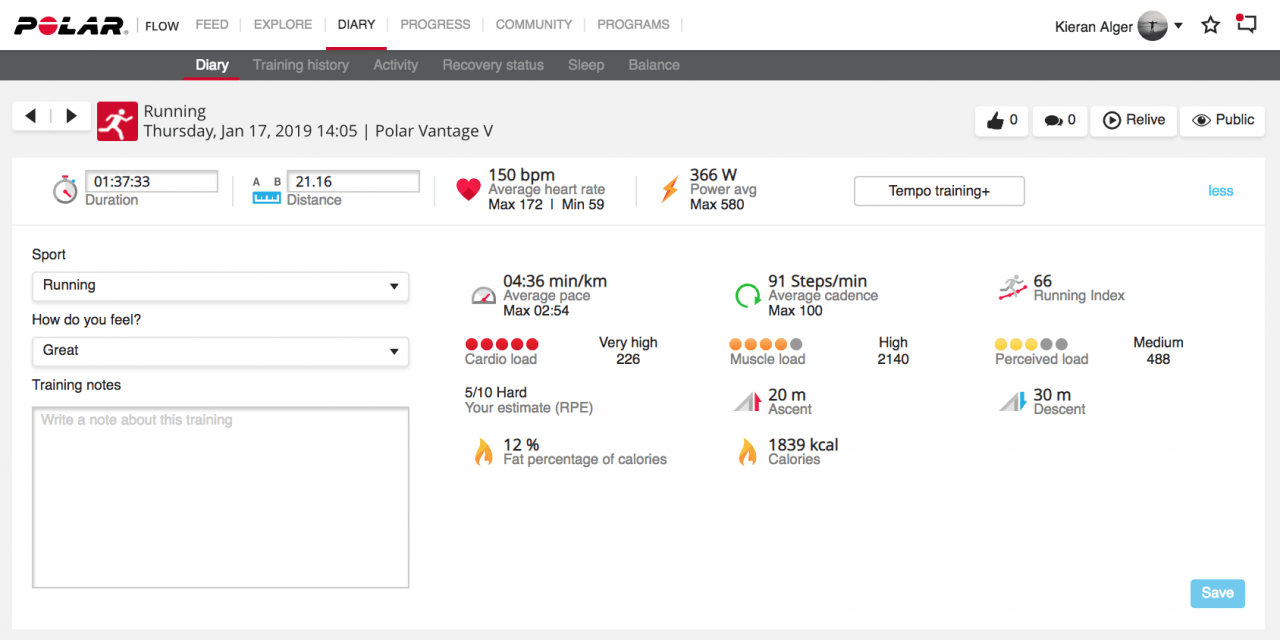 Summary of a threshold run

I’d also recently run 190 miles in three days along the Thames from source to sea, and so we also knew that I had to watch my training load carefully. So we did regular heart rate variability based orthostatic tests – at least one every three days – using the H10 chest strap so that we could keep track of my recovery and see how the training load was building.

This proved to be crucial. Just a few weeks into the plan, I went out for a threshold session and everything felt wrong. I was fighting to hit the power levels, my body felt burdened and I felt demoralized. Until I phoned my coach and went through the Polar Flow data.

What we saw instantly was that I was overreaching – heading into the orange zone in Polar Flow’s training load tracking – and in danger of illness or injury as a result. My coach could see that I’d also been going out a bit too hot in some of my sessions. We adjusted my training schedule, retaining the type of runs, but moving around the timings to help give me more time to recover.

Within a few days I was back in the green zone, feeling much better physically and mentally. The training load and recovery insights had provided objective data to back up what I’d been feeling out there on the roads and we were able to respond in time to fix it.

Much of my training was done in the New Forest where the roads and tracks around me are ‘undulating’. We’re not talking mountain trail steep but you can’t run far from my front door before you hit decent inclines, some of them the worst kind, the hidden, creeping hill.

And this can wreak havoc with your ability to run to the intensity your coach has set you. The heart rate lag can mean you don’t know you’re overcooking it until you crest the hill, running at the same pace up a hill on your long run is guaranteed to mean you’re putting more strain on your system than perhaps your coach has planned. That’s where power comes in.

Because power shows you exactly the level of effort you’re putting in, in real time, you can adjust more easily. You simply run to one number whether you’re on the up or the flat, and your pace naturally decreases. It’s a way to flatten out the hills in terms of ensuring you stick to the training intensity you have on your plan.

Moving closer to the goal

Over the course of the 12 weeks I was able to use the Running Index Report to track my improvement. My moving average score jumped from 57 to 66 over the course of the training block. The predicted times this also offered up gave me confidence, because I could see after each run that my training was moving me closer to my sub-3 goal.

Another important aspect of this was my sleep. A quick glance at my sleep data from the Polar Vantage V showed that I wasn’t getting nearly enough and that my sleep continuity – the uninterrupted hours of sleep – was low. I can’t say we transformed that but I worked to improve it, to help my body get more of the most vital part of recovery there is.

After 12 weeks of hard work, we put Project Power to the test at the Seville Marathon. Ten days before the race I was hit by a cold and once again the Vantage V proved invaluable.

With regular orthostatic tests and some easy 30-minute runs, we were able to delve into the heart rate date to see if my system was recovering or if I needed to carry on resting. It wasn’t until the day before the race that my heart rate normalized on my shake out run.

For the race, I set up my Vantage V to have a split screen showing pace, power and heart rate. The combination of the metrics meant I was able to run a smart, steady race, avoiding the common mistakes of going out too fast.

Having run a half marathon three weeks earlier at marathon pace, I knew exactly what power I could maintain without blowing up. And I stuck to it as much as possible.

The end result was one of the most evenly paced marathons I’ve run in 41 marathons. Yes, it still hurt from mile 22, but there was no blowing up at 18 and I was always in control.

For more running tips by Kieran Alger, check out his blog Man v Miles (in English)

Looks like you’ve spent a good while with our content – we’re thinking you find it interesting. You should know that there’s more of it coming at regular intervals (pun intended). To get the frequent running goodness automatically, sign up for our twice a month running newsletter.